It's been a while. I've been getting distracted by all things geeky. I thought I'd share this though.

I became curious by the Apple-1, the original must have Apple product, the Ford Model T of computers if you like.  All you got was a circuit board, but no keyboard or monitor (a bit like the raspberry Pi of its day).  I decided to look for an emulator for it, and at this stage knew nothing of the Apple-1's underpinnings.  It wasn't a Z80 but my old friend the 6502.  I've not touched the 6502 since secondary school when I used to play with the Commodore PET/CBM in the early 80's.

I got the Pom-1 emulator in Java flavor and downloaded the Apple-1 manual.

I soon realised that to program the Apple-1 you just entered 6502 machine codes and ran the machine code programs.  No BASIC interpreter (although there is a 6502 program for the Apple-1 that you can load in to get BASIC).  So I set about relearning 6502 machine language and so far my efforts have resulted in my first "Hello World!" program.

Here's a screenshot of the code and it running: 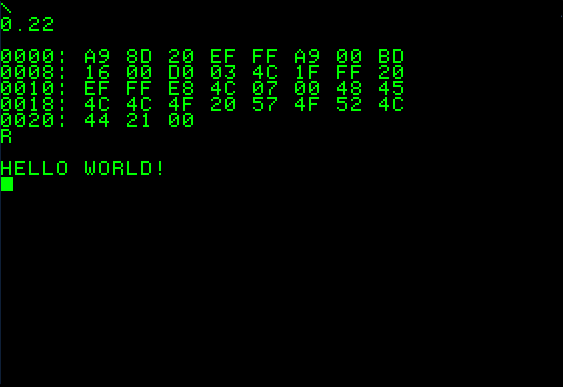 \ is the only screen indication that the Apple-1 is alive.  0.22 displays the first 23 bytes and R runs from address 0.

Why is this relevant?  Well this is something like what I want to build with the Z80
Posted by Dave at 22:47